2015 Citizen of the Year Award

I don't think I do anything special. I just do what you're supposed to do. Thank you.

Almost every year since 2007, Chamber members have selected one among us to honor with a very special 'Thank You' from the community in the form of a Citizen of the Year award. 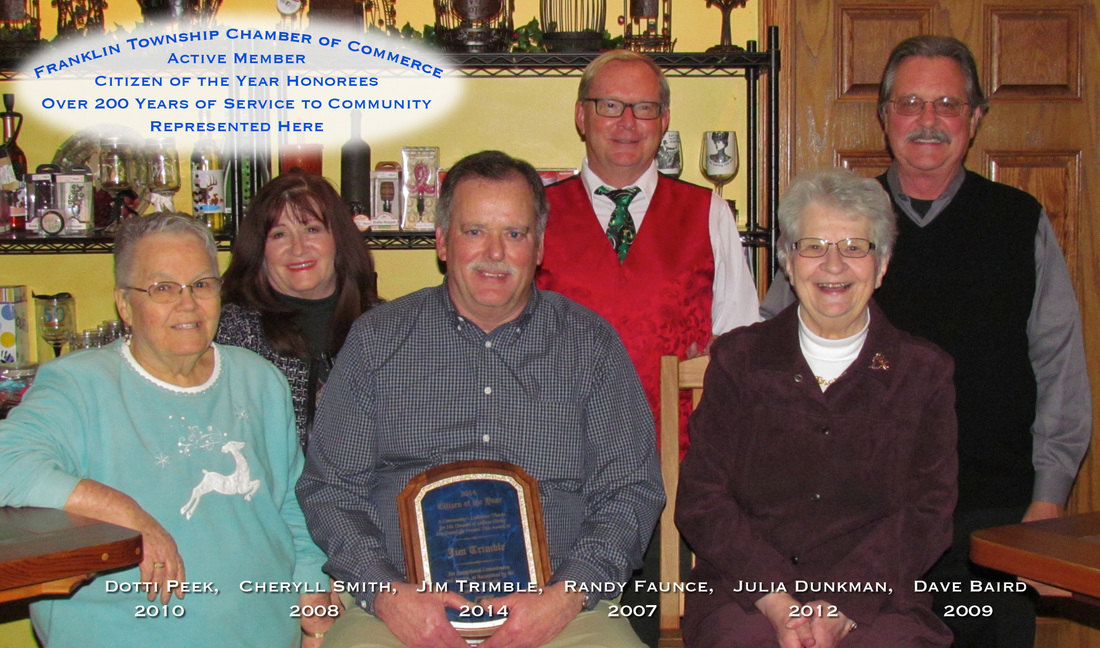 Pictured above are all of the current members of the Chamber (as of Dec 2014) who have received this recognition.
All of these folks have multiple decades of volunteer service to the community, and each has also distinguished him/herself outside the Chamber of Commerce.  It is also these folks who serve on the committee to select nominated individuals for this same award.

From left to right:
Dotti Peek has been the Chamber's newsletter editor, served on numerous committees (scholarship, Easter Bunny & Santa House, Econ Dev, etc.), volunteered with Mended Hearts, her church (St John), and most notably, the Buck Creek Players (she has a statewide and even national reputation for her dedication to community theater).
In May of 2015, Dotti succumbed to illness - may she Rest In Peace.

Cheryll Smith is 1 of just 3 of our three term presidents, chaired the directory project for many years (major task), served on the scholarship committee, and has chaired both the Easter Bunny and Santa House photo projects (public, kids mostly) since inception. Cheryll is also the Founding president of the Franklin Township Education Foundation.

Jim Trimble co-chaired the Old Settler's Day Wanamaker Street Fair for 17 years, then continued to assist the Franklin Township Lions with same when they took over management of the event. He also chairs the Christmas in Wanamaker festival (decade plus). And he serves the New Bethel Cemetery Board (keeping track of plot ownership & sales), hosted the Franklin Township Fireworks for many years, and supports the schools and youth projects (too numerous to list).

Randy Faunce, the latest of our 3 term presidents, has been on the scholarship committee for 30+ years, the Econ Dev committee since inception, the Christmas in Wanamaker committee since inception, created/managed our first web site for 5+ years (and manages content on this one). He is also very active in the Franklin Township Lions (past pres), the Civic League (past pres), his professional association (Indiana Optometry), his car club (national Street Survival teen car control clinic coordinator and local performance driver education director), education foundation (founding pres of the Southern Hancock {New Pal} Education Foundation), and more.

Julia Dunkman is the other 3 term president, volunteering as chair of the Old Settler's Day Wanamaker Street Fair for 17 years (yes, that's SEVENTEEN YEARS), launching the Revitalize Wanamaker and the Economic Development committees, serving as our one and only Executive Director for many years. Julia was a wonder of energy and ideas right up to her passing in December of 2015.

Dave Baird has been active with the Chamber since the 1970's (longest serving of our volunteers), a past president, past chair and current supporter of the Economic Development Committee and it's efforts to improve Franklin Township. His efforts are more behind the scene, but arguably more impactful and effective than any other project/committee we work.
​